Rabat - HM King Mohammed VI chaired, on Wednesday at Rabat royal palace, a council of ministers during which two draft laws and two international agreements were approved, said a statement read out by spokesperson of the royal palace Abdelhak Lamrini. 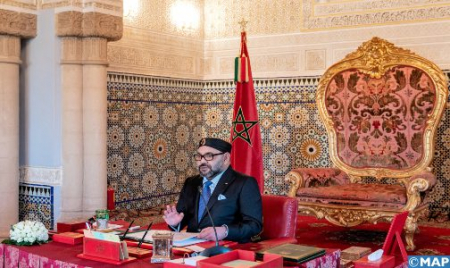 At the beginning of this Council, a draft organic law completing the organic law on appointment to high positions was approved, in accordance with the provisions of Articles 49 and 92 of the Constitution.

This project aims to complete the list of public institutions and high positions, by adding the National Agency of Public Facilities, as well as the chiefs of sectoral regional administrative representations and the heads of the common regional administrative representations, stipulated by the decree on the National Charter of Administrative Devolution, to the list of public institutions and senior civil service positions whose appointments are examined in the Government Council.

The Council of Ministers also approved a draft bill to control the export and import of dual-use civilian and military goods as well as services related to them.

This project is part of Morocco's compliance with its international commitments to combat the proliferation of weapons of mass destruction, notably through the control of the export and import of these dual-use goods.

The project seeks to establish the regime applied to the export and import of these goods and services related to them, with the exception of those reserved for National Defense, as well as the authorization regime relating to the export, import, transit, control, identification of infringements and the setting of commitments of exporters and importers.

As part of Morocco's respect for its regional and international commitments, the Council of Ministers approved two multi-party draft agreements, supported by two draft laws. They are multi-party agreement for the implementation of tax treaty measures to prevent tax base depreciation and profit transfer, as well as a multi-party agreement between the competent authorities in terms of exchanging tax information for each country.