Agadir - HM king Mohammed VI, accompanied by HRH Crown Prince Moulay El Hassan, chaired, on Tuesday, the launching ceremony of the Agadir urban development program (2020-2024), a structuring project that initiates a new stage in the promotion of the city's role as an integrated economic hub and locomotive of the entire region. 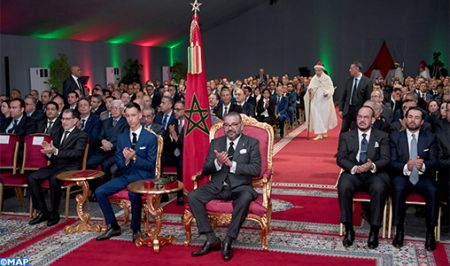 Worth 6 billion dirhams, Agadir's urban development program aims at consolidating the city's positioning and strengthening its attractiveness as a national and international tourist destination, improving human development indices, promoting the living conditions of the population, particularly the inhabitants of under-equipped neighborhoods, strengthening basic infrastructure, and consolidating the city's road network for better mobility.

At the beginning of this ceremony, minister of the Interior, Abdelouafi Laftit presented, in an address before the Sovereign, the general framework of this program developed in accordance with the High Royal Orientations contained in the historic Speech addressed by HM the King on the occasion of the 44th anniversary of the Green March and in which His Majesty had called for the reinforcement of the basic infrastructure of the Souss-Massa region and its road network, the establishment of a rail link Marrakech-Agadir and the consolidation of the strategic position of the region.

Highlighting the region's abundant economic assets, Laftit said that its enormous potential predisposes it to become a real, attractive and competitive economic hub, capable of meeting the challenge of advanced regionalization and consolidating its national and continental influence.

The minister of the Interior also noted that the region of Souss-Massa is currently witnessing, thanks to the Royal High Solicitude, the implementation of several structuring projects, especially those under the regional Program for the reduction of territorial and social disparities, the Industrial Acceleration Plan, as well as those of the agriculture, tourism and social and solidarity economy sectors.

The implementation of this program will be carried out in accordance with the mechanisms of good governance, in order to ensure rigorous and transparent monitoring of the planned projects, by respecting the deadlines and objectives set, Laftit went on to say.

The minister of the Interior also stressed that a draft regional development program contract between the State and the Souss-Massa region was being drawn up according to a participatory approach, noting that priority is given to regional development projects that promote sustainable development, diversification and a strengthening of the economy, as well as an improvement in the attractiveness of territorial areas.

In a similar address, the Wali of the Souss-Massa region, governor of the prefecture of Agadir-Ida Outanane, Ahmed Hajji, stressed that the new program is based on a systematic participatory approach involving the various stakeholders in the city and is structured around six main aspects.

The first aspect relates, according to Hajji, to the achievement of the first high service bus line of the city of Agadir on a linear of 15.5 km, connecting the port of Agadir to the neighborhood of Tikiouine and surrounding industrial zones, and serving the administrative neighborhood of the city, Hassan II avenue, Souk El Had, Hassan I avenue, the university complex Ibn Zohr, and the industrial zone of Tassila.

The second aspect of this program, relating to the reinforcement of infrastructures and the decongestion of the city, provides for in particular the achievement of the first phase of the North-East bypass road, with a length of nearly 25 km and linking the airport of Agadir Al-Massira to the commercial port of the city, the development of engineering structures and new entrances to the city from this future road, and the widening and rehabilitation of the expressway, Hajji underlined.

The third aspect concerns the urban development of the tourist zone of Agadir and the reinforcement of its attractiveness, through the implementation of several projects, in particular the rehabilitation of the cornice, the achievement of public facilities (tourist information office, Timitar museum), the transversal connection of the city with the coastal zone, the reinforcement of the road and lighting network, the redevelopment of the green spaces in the area, the rehabilitation of the "Vallée des Oiseaux" park, the renovation of street furniture, and the creation of themed tourist circuits, he noted.

As for the fourth aspect, it includes the preservation of the environment and the development of the city's green spaces. According to Hajji, this provides for the creation of Tikiouine park (28 ha), Al Inbiâat park (25 ha), the restructuring and upgrading of Ibn Zaidoun park and Olhaou garden, the rehabilitation of several gardens and public squares, and the modernization of street furniture.

The Wali of the Souss-Massa region said, in this regard, that the green spaces of the city of Agadir, as well as golf courses, will be irrigated with treated wastewater in accordance with the High Royal Orientations concerning the valorization of wastewater and the preservation of water resources, recalling that the production capacity of the wastewater treatment plant was 11 million m3.

The fifth aspect consists of three components dealing respectively with the promotion of religion matters, the protection and enhancement of the city's heritage, and cultural promotion, said Hajji.

The sixth and last priority of Agadir's urban development program concerns the strengthening of basic social amenities and aims at completing the upgrading of under-equipped neighborhoods, supporting the city's demographic and urban development and improving the citizens' living environment, he added, noting that several actions are planned under this same priority and concern the sectors of youth and sports, health, education and local economic and commercial activities.

To ensure the full success of this program and its timely implementation, two local development companies "Agadir Souss Massa Aménagement" and "Grand Agadir de transport et de mobilité urbaine" will oversee the achievement of the various projects planned under the new program, he concluded.

Afterwards, HM King Mohammed VI presided over the signing of the framework-agreement on the urban development program of the city of Agadir (2020-2024).

At the end of this ceremony, the Wali of the Souss-Massa region, governor of the prefecture of Agadir-Ida Outanane, Ahmed Hajji handed the Sovereign a box set containing Agadir's urban development program.