Agadir - HM King Mohammed VI chaired, on Thursday, at the Drarga commune in Agadir, the signing ceremony of the agreement relating to the financing of the Cities of Trades and Skills (CMC), and launched the construction works of the City of Souss-Massa region. 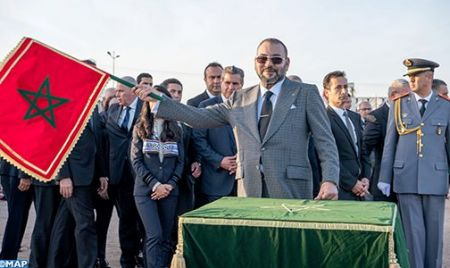 At the beginning of this ceremony, director general of the Office for Vocational Training and Labor Promotion (OFPPT), Loubna Tricha, presented, in an address before the Sovereign, an overview of the reform and development projects undertaken by the Office, in implementation of the Royal High Guidelines, and in accordance with the new roadmap for the development of vocational training.

"The aim of these projects is to provide quality training according to new material and pedagogical criteria which guarantee a certain convergence between the training provided and the real needs of the labor market and contribute to the promotion of the image of vocational training as a lever for development, employment and social inclusion," she said.

In this regard, the Office is working with professionals to restructure its training offer, added Tricha, noting that 2019 was marked by the launch by the Office of a project to update training engineering, which concerns all sectors and will make it possible, by 2021, to set up, at the level of the various institutes under the Office and the Cities of Trades and Skills, new training courses and modern programs that meet the expectations of sectoral and regional ecosystems.

She also noted that, in parallel with the program of reform and upgrading of training facilities, the Office is working to expand the existing offer through the implementation of several projects, provided for in agreements signed under the chairmanship of the Sovereign and which concern the creation of 28 establishments throughout the various regions of the Kingdom.

Similarly, in accordance with the High Royal Instructions relating to the consolidation of the teaching of foreign languages and the integration of new technologies in training courses, the OFPPT has acquired, at the end of 2019, a platform for language teaching with face-to-face and distance learning units, said Tricha, adding that this platform will be operational from the next academic year of vocational training.

Tricha also pointed out that a digital media library of nearly 40,000 books in all specialties had been made available to trainees, trainers and administrative staff, noting that in order to support trainees and help them in their choice of specialization, the Office is working on an electronic platform and an orientation program designed to make candidates aware of the importance of their future career plans.

As part of OFPPT's commitment to the implementation of the integrated Program of support and financing of enterprises, launched by HM the King, the Office is working, according to Tricha, on the development of a new program aimed at raising awareness among trainees on the importance of entrepreneurship and self-employment, in addition to the modernization of programs dedicated to project leaders and participation in qualification programs aimed at integrating the informal sector.

On this occasion, the director general of the OFPPT emphasized that the Office ensures the development of human resources through, in particular, the adoption of a recruitment policy aimed at greater efficiency in supervision and management, as well as adapted programs of continuous training, able to contribute to the strengthening of the technical and pedagogical skills of the various participants in the training process.

Subsequently, HM the King presided over the signing ceremony of the agreement relating to the financing of the Cities of Trades and Skills.

The agreement was signed by Mohamed Benchaaboun, minister of Economy, Finance and Administration Reform, Saaid Amzazi, minister of National Education, Vocational Training, Higher Education and Scientific Research, Dounia Ben Abbas Taârji, president of the executive board of the Hassan II Fund for Economic and Social Development, and Loubna Tricha.

The Sovereign then kicked off construction works of the City of Trades and Skills Souss-Massa, which will be built on 15 hectares of land, including 5 hectares reserved for future expansion, with an overall budget of MAD 430 million.

The future City was designed to accommodate 3,000 trainees each year, with an interns' residence including 400 beds. The training offered by the City of Trades and Skills Souss-Massa will concern 10 sectors of trades and will be divided into 88 training branches, of which 80% will result in a diploma (skilled worker, technician and specialized technician) and 20% in a short-term qualification (training certificate).

The CMC - Souss-Massa is the first concrete expression of the program of the Cities of Trades and Skills, worth 3.6 billion dirhams and provides for the achievement of 12 CMCs across the Kingdom which will be multi-sectoral vocational training platforms and will host, each year, a staff of 34,000 trainees.