Al Hoceima - HM King Mohammed VI delivered, on Thursday, a speech to the Nation on the occasion of the 67th anniversary of the Revolution of the King and the People. 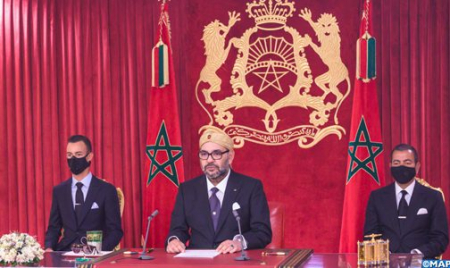 Here follows the full text of the royal speech:

"Praise be to God,
May peace and blessings be upon the Prophet, His Kith and Kin

That glorious revolution was characterized by a spirit of sincere patriotism and by a commitment to the values of sacrifice, solidarity and loyalty with a view to achieving Morocco’s freedom and independence.

The history of our country is replete with timeless events and actions which attest to strong cohesion between the throne and the people in facing up to hardships.

Moroccans have again shown their commitment to the same values and principles and to the same collective mobilization, especially during the initial phase in the fight against the Covid-19 epidemic.

During that early phase, and thanks to the concerted efforts of each one, we managed to limit the repercussions of the crisis on people’s health and to mitigate its socioeconomic impact.
In this regard, government authorities have provided assistance to large segments of the population, and I have launched an ambitious, unprecedented plan to revive the economy, as well as a major project to make sure all Moroccans have access to social welfare coverage.

I must insist on the need to implement these projects efficiently and within the specified timeframes.

Despite the efforts made so far, we have not yet won the battle against this epidemic. Needless to say, these are difficult, unprecedented times for everyone.

It is a fact that we were cited as an example for complying with the preventive measures taken and for the positive results achieved during the lockdown period.

We are proud of the measures adopted, especially those which resulted in the low number of deaths and the small number of infections compared to many countries.

Regrettably, with the lifting of the lockdown, the number of infections has increased significantly, for many reasons.

There are people who claim that this epidemic does not exist. There are those who believe that the lifting of the lockdown means the epidemic is over, while others are behaving in an unacceptably lax and careless way.

It must be emphasized, in this regard, that the disease is very much real. Those who claim otherwise are not only putting themselves in harm’s way, but they are also endangering the lives of their relatives and of others.

It should be noted that in some patients, symptoms appear after 10 or more days. What is more, many infected individuals are asymptomatic. This increases the risk of spreading the infection and therefore requires greater vigilance.

This disease makes no distinction between urban and rural populations, nor between children, youths and the elderly.

Many people do not respect the protective measures advocated by the government authorities, and which include the wearing of masks, social distancing, hygiene and the use of disinfectants.

Had hygiene and cleaning supplies not been available on the market, or had they been expensive, such behaviour might have been understandable. However, the government authorities have made sure these materials are abundantly available and are very reasonably priced.

The State has also subsidized face masks and encouraged their manufacturing in Morocco so they can be accessible to all.

In fact, that behaviour on the part of some people runs counter to the values of patriotism and the spirit of solidarity, for patriotism requires, first and foremost, that we care for the well-being and safety of others. As for solidarity, it is not limited to financial support. In a context such as this one, it implies, above all, a commitment not to spread the infection among people.

Moreover, such conduct undermines government efforts – those which have enabled us, by the Grace of the Almighty, to provide assistance to many families that have lost their livelihoods.

However, that assistance cannot last forever, for the State has already exceeded the means and resources available to it.

With the relaxation of the lockdown, a number preventive measures were taken to preserve the safety of the citizens and curb the spread of the epidemic. Nonetheless, we have been surprised to note an upsurge in infections.

The deterioration of the health situation today is unfortunate and does not leave much room for optimism. Whoever tells you otherwise - Dear Citizens - is simply lying to you.

Once the lockdown was lifted, the numbers of confirmed cases, severe cases and deaths have increased more than threefold over a short period of time, compared to those registered during the lockdown.

Moreover, the infection rate among health workers has gone from one infection per day during the lockdown to ten infections recently.

If figures continue to increase, the Covid-19 Scientific Committee may recommend another lockdown, perhaps with even tighter restrictions.

Should that decision - God forbid - become inevitable, it will have severe repercussions on people’s lives and on socio-economic conditions.

Without strict, responsible compliance with health and safety measures, the number of cases and deaths will increase, and hospitals will no longer be able to cope, notwithstanding the efforts of government authorities and the health care sector.

In addition to the measures taken by government authorities, I call on all stakeholders to be mobilized and vigilant, and to get actively involved in national efforts to promote awareness and provide guidance to the citizens so as to stem the epidemic.

Let me remind you that without exemplary, responsible and patriotic attitudes on the part of each one of us, there will be no way out of this situation, and we will not be able to rise to the challenge posed by the epidemic.

My message to you today is not meant to be one of rebuke or blame. I am simply relaying directly to you my fear that the number of infections and deaths might - God forbid - continue to grow, thus compelling us to return to a complete lockdown, with its psychological, social and economic repercussions.

Today, as we celebrate the anniversary of the Revolution of the King and the People, we need, more than ever, to reminisce about the values of sacrifice, solidarity and loyalty underpinning that event in order to make it through these tough times.

There is no doubt in my mind that Moroccans can rise to the challenge, follow in the footsteps of their forebears and commit to the spirit of true patriotism and constructive citizenship, for the good of the people and the homeland.