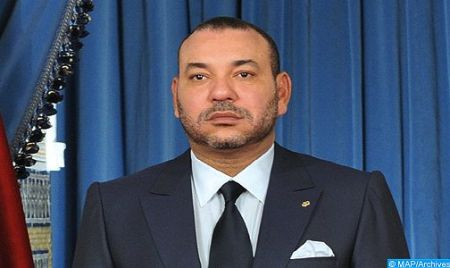 In this message, the Sovereign said he was very saddened and deeply moved by the news concerning the passing of HH Sheikh Sabah Al-Ahmad Al-Jaber Al-Sabah, Asking the Almighty to welcome him in His vast paradise.

In this painful time, HM the King expressed to the Emir of Kuwait and through him to his illustrious family and to the brotherly Kuwaiti people, on His behalf and that of the Moroccan people, His heartfelt condolences and sincere compassion following this cruel loss, Praying God to give them patience and comfort.

The Sovereign affirmed that with the passing of Sheikh Sabah Al-Ahmad Al-Jaber Al-Sabah, the Arab Ummah lost one of its wise and seasoned leaders, recalling, in these trying times, the pioneering achievements of the great deceased and the important economic and political accomplishments of the brotherly State of Kuwait which have enabled it to hold a remarkable position and an active presence in its regional and international environment, as well as to contribute with dynamism, neutrality and openness to the support of just Arab causes and the consolidation of ties of understanding and solidarity between Arab and Islamic countries.

The Kingdom of Morocco also recalls with esteem the attachment of the deceased to the strong bonds of brotherhood and active solidarity, underlined the Sovereign, noting that late Sheikh Sabah Al-Ahmad Al-Jaber Al-Sabah kept providing all forms of support for its second country, Morocco, and promoting the exemplary relations between the two countries, which "We, for our part, did not stop reinforcing to ensure further development".

HM the King asked the Almighty to fully compensate the deceased for his good deeds in the service of his country and the Ummah and to welcome him in His vast paradise.

The Sovereign also Prayed God to keep HH Sheikh Nawaf Al-Ahmad Al-Jaber Al-Sabah and his illustrious family from harm's way and to grant them health, tranquility and long life.