Dakhla - Minister of Foreign Affairs, African Cooperation and Moroccans Abroad, Nasser Bourita, said Sunday in Dakhla that relations between the Kingdom of Morocco and the United States of America are developing at an unprecedented pace, in line with the vision of His Majesty King Mohammed VI and in coordination with the US administration. 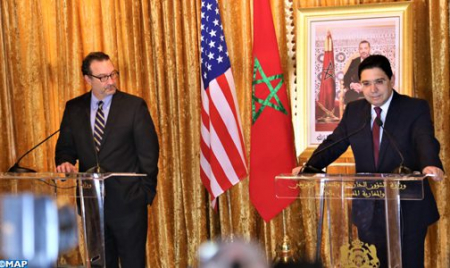 Speaking at a joint press briefing following talks with the US assistant secretary of State for Near Eastern Affairs, David Schenker, Bourita explained that these relations have developed over the past few years, through the visits of high-level officials from the United States to the Kingdom of Morocco, the signing of several agreements, trade development and joint coordination.

Bourita stressed that this relationship is based on common principles, history and values, as well as on common interests and a harmonious vision regarding a set of international issues, adding that the strength of this relationship lies in the fact that Morocco may be the only country in the region that has unprecedented mechanisms in its relationship with the United States.

"We have a free trade agreement, a strategic dialogue, the designation of Morocco as a major non-NATO ally of the US, cooperation programs, as well as several trade and cultural agreements with the United States of America," he pointed out.

All these mechanisms give the relationship a special and distinct character, in line with the determination of HM the King to ensure that Morocco, while opening up to new partners, strengthens its relations with its historical partners and the United States has always been an exceptional partner of Morocco in all issues, the minister said.

He pointed out that the relationship between the two countries is based on four basic pillars, which include first the political and diplomatic component through strategic dialogue and coordination of the two sides' positions that remain very close on many international issues, and secondly the important security and military cooperation between the two countries in the area of combating terrorism and organized crime, as well as coordination between Moroccan security interests and their American counterparts, based on their joint action to achieve security and stability.

In this regard, he stressed that Morocco has always been the pole of stability in the North African and Sahel regions and a central player in the fight against terrorism and organized crime across the world, recalling that, following the instructions of His Majesty King Mohammed VI, an ten-year agreement was signed in October in the military field between the United States and the Kingdom of Morocco.

Concerning the third pillar, Bourita pointed out that the free trade agreement enabled the volume of bilateral exchanges to be quadrupled since its signing, as it moved from one and a half billion to more than five billion dollars in trade exchanges, highlighting that this trade exchange will develop further in the future towards Africa. "Hence, the opening of the US consulate in the city of Dakhla is part of the strengthening of the African depth of the Kingdom of Morocco in the areas of trade and investment."

As for the fourth pillar, represented by the human component, it includes elements related to training through four or five American schools located in some cities of the Kingdom, as well as agreements in the cultural field and scholarships for Moroccans in the United States, which contribute to creating understanding at the human level between the United States and the Kingdom of Morocco.