Dakhla - A high-level US delegation, led by Assistant Secretary of State for Near Eastern Affairs David Schenker, on Sunday visited the premises of the future Consulate General of the United States in Dakhla. 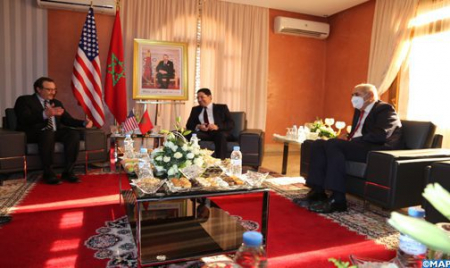 The US delegation, accompanied by minister of Foreign Affairs, African Cooperation and Moroccans Abroad, Nasser Bourita, and the US ambassador to Morocco, David Fischer, toured the various offices of this future US diplomatic representation.

During this visit, the Wali of the Dakhla-Oued Eddahab region, governor of the province of Oued Eddahab, Lamine Benomar, and the presidents of the elected councils were also present.

The US Assistant Secretary of State for Near Eastern Affairs arrived on Saturday afternoon in Dakhla, the second stop on a tour in the Moroccan Sahara after Laayoune.

The visit to Dakhla of this high-level US delegation is the result of the telephone conversation held, on December 10, 2020, between HM King Mohammed VI and US President Mr. Donald Trump who had announced the signing of a proclamation, with all that this act entails as an undeniable legal and political force and with immediate effect, on the decision of the United States of America to recognize, for the first time in its history, the full sovereignty of the Kingdom of Morocco over the entire region of the Moroccan Sahara.

In this regard, and as the first concrete expression of its sovereign initiative of great importance, the United States of America has decided to open a consulate in Dakhla, with a primarily economic vocation, to encourage U.S. investments and contribution to economic and social development, mainly for the benefit of the inhabitants of the southern provinces.